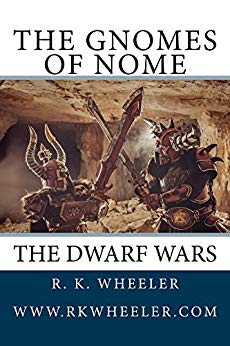 King Arthur and his famous sword is one of many mental fantastical images that I will never get out of my head. Growing up, discovering fictional heroes like him must’ve been just about my most favorite thing to do. The Gnomes of Nome is a short novel taken out of R.K. Wheeler’s epic fantasy novel War in Heaven: Scions of Azazyel. It starts with King Arthur and Modred, his bastard son, dying after delivering fatal wounds to each other. One last time, he summons the strength of Excalibur to prolong his life just a little bit longer. He hears Lancelot’s voice, and we are immediately placed into the present time, hundreds of years later, and we’re told that Armageddon draws near.

Angelica and Jonah, brother and sister, are descendants of Azazyel, a fallen angel who used to be one of the twelve Sons of the Morning. Archangels. Gabriel, who has descended down to the earth, escorts Angelica and Jonah to Nome in Alaska and leaves them with a quest to complete. They are to find a gnome chief named Aternerk Sangliak and retrieve the Rod of God, the very staff God once gave to Moses in the biblical book Exodus. Retrieving the staff, however, won’t be as easy as simply asking Chief Aternerk Sangliak, who had grown rather fond of it, to give it back. Not only that, the staff is greatly feared by the dwarves, the enemy of the gnomes. Chief Aternerk Sangliak, thus, has reason enough to want to keep it for himself.

We are started off with a brief account of King Arthur after an ill-fated battle with Mordred, a visual overview of the Nine Realms, and a prologue introducing us to Hadgrim, a young dwarven prince, who is awoken by his father, the Dwarf King; he holds a magical item called the Dwarf King’s Heart. One of the Nine Realms, Svartalfheim is shown to be the realm of the dwarves and gnomes. Hadgrim’s father, dressed in armor, informs his son that the giants are at their doors. From Jonah and Angelica escorted to Nome, readers are taken back to this point, about halfway through the book.

With over three and a half million ounces of gold already recovered and situated in Alaska, Nome is said to be the world’s largest gold pan. Readers quickly learn how Nome got its name in the first place: it is partly due to an abject misspelling of a word in another language that meant gnome or little people. Of the gnome world itself, the author does a wonderful job of describing things. We learn, at one point, that men and women have their own separate cells, how their plumbing system works, and how their world is definitely not made for humans who are much taller specimens than them.

The gnomes are certainly a one of a kind species. Worshiping Poseidon, they don’t like Christians very much. Their reasons including that Christians are too judgmental and pushy. Further details about gnomes are revealed when Jonah asks a newly made ally named Uncle Tok to tell him more about the gnomes. In Nome, we learn that there is another name for them: Enukins. What I learned about them here was a lot of interesting facts such as beverages that they were fond of drinking, how you got two types of Enukins and not just one, and how to stop one who might be of the mischievous kind from turning invisible.

Angelica, who has become an atheist after the death of her parents, is told by Gabriel that she should regain her faith in God and repent. What she is mainly struggling with is why God would allow a terrible thing like what happened to her parents. She possesses an item of power. The Ring of Solomon. To use it, she must find faith in God. Gabriel and Raphael, two of the Faithful Archangels, decide to train them during their journey through the Nine Realms and it is then that Angelica is finally put to the test. Jonah, meanwhile, is extremely knowledgeable and he, like Angelica, comes into possession of an item of power.

Transfigured, a term the author often uses, the two Archangels are sights to imagine. I liked how Wheeler illustrated that they had a weakness. “Raphael stood a while longer before sitting with his back against a stalagmite.” Cut off from God’s light the deeper they travel into the Nine Realms, which is situated beneath the earth, the Archangels start to grow weaker. The Gnomes of Nome, meanwhile, aren’t the only fabled creatures to meet. A genealogy section at the end of the book gives us more information about gnomes and dwarves.

When it comes to epic fantasy novels, I enjoy following heroes made up of various kinds of humanoid races as much as the next fan of this genre. R.K. Wheeler has certainly put all of that into this book and more. This book is short, but it packs a punch. There are a variety of magical creatures and mythological figures to encounter along the way. Don’t be surprised if you want to encounter others by the time you reach the last page.

* I reviewed a longer version of the book I linked to on Amazon below.

Living in Cape Town, South Africa. People often tell me that I should get out more, but I'd rather read my brains out. View more posts