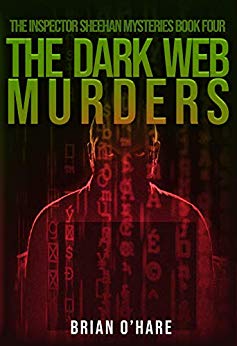 For me, there is nothing better than to sit down on a nice comfortable chair with an excellent and well worked out crime novel that harbors it’s own unique touch. Brian O’Hare astounded me with both The Doom Murders and The Coven Murders, respectively book 1 and 3 of the Inspector Jim Sheehan Mysteries. The Dark Web Murders is the fourth book in this excellent series and it’s also set in Northern Island, where Sheehan and his team deal with serial killers while confronted with obstacles in and out of the realm of law enforcement.

Chief Inspector Jim Sheehan and his team investigates the murder of one Judge Trevor Neeson, his corpse found with a camel-hair overcoat that has been carefully draped over it. The second person to get murdered is a teacher. After going through a couple of official death threats made out to the judge, Sheehan can’t help but wonder if the two deaths are connected. After a third death, a blog post on the dark web – a sinister network with off-the-wall data – reveals who the killer is, a psychopath with an interesting mental state and a unique sense of justice.

The author begins his book with his prologue set on the date August, 2012. Isolated from his family, Kevin Lane is sentenced to serve time in Magilligan Prison for seven years for a serious offence that might just be an accident. Manslaughter. He gets attacked by two men in the prison shower and ends up murdered, his death registered as accidental. For the most part, there’s a cloud of vagueness surrounding the significance of Lane’s death as to that of the others. In the month of August, 2018, Judge Trevor Neeson gets murdered. A connection to Lane’s death is eventually made.

A married man, Sheehan, as I remember him, is still an intuitive detective who gets his most important answers by clearing his mind for, how the author tends to put it, enlightenment. While working a case, he has a habit of making notes of thoughts in his mind and observations. He has a unique ability to show empathy for people with criminal backgrounds. The detectives on his team respect him a lot.

Sheehan’s female partner is Detective Sergeant Denise Steward who is very helpful and resourceful when it comes to getting information. Especially through her smartphone and computers. It is through her handy work that, despite Sheehan’s innate disapproval, the Dark Web becomes a factor for solving the murders. I wouldn’t call Stewart dumb, but only inexperienced in Sheehan’s eyes. Sheehan seems to always want to teach her something. For example: she would ask him a question, he would give her a quick answer, and he would look at his watch. Stewart seems to want to grow up fast in Sheehan’s eyes by thinking out of the box.

Another member of Sheehan’s team include Sergeant McCullough, a stout and balding man in his late fifties who has gotten a brand new perspective on the world because of a prior case they worked on involving Satanists. Other detectives on his team include McNeil, McBride, and Collins. My favorite still happens to be Campbell, the forensics expert.

“Philosophy is objective. Suffering is subjective. Philosophy simply examines ideas. Suffering is real. And when the right to vengeance is denied, there comes great outrage and a deep-seated infuriation that cries to heaven for action.” This quote comes from a blog post that an intriguing and beguiling blogger using the alias Nemein wrote that a number of internet users all over Northern Island wrote. It sits with me because I have my own experiences with holding onto bottled up anger as an introvert.

O’Hare writes that Nemein is a Greek word that means “to give what is due”. It strongly looks like he can be the killer, but his gender, after a third blog post that he published, is up for debate. Suspected of being highly intelligent and manipulative, Nemein might be a man, woman, or a transgender male. Nemein’s psych is one of the most fascinating I’ve come across. His blog posts reveal a lot about his personality. He is an excellent writer who writes like an old style writer and who uses, as Detective Miller puts it, five dollar words. He seems to be hard at work to build his law breaking audience on the dark web with his/her beautiful writing capabilities.

O’Hare has a savvy way of illustrating the high and mighty, using words like dignified and glitterati. There are some unique things to learn like safety procedures concerning things like safes and investing good money on it. Police procedures for victims trying to recognize a perpetrator’s voice are also expertly defined.

The author inserts information about medications that can have a negative influence on readers with homicidal or suicidal tendencies. It’s quite informative, and I thought I’d use this paragraph to criticize the author on it, but thankfully it’s not overly promotional (the blogger Nemein’s knowledge). He writes about something called strychnine, a type of poison that used to be easy to purchase over the counter and was used commonly for pest control.

The difference between male and female psychopaths is a subject of great debate. But the correlation between this and Sheehan’s partnership with Stewart cannot go unnoticed. Thus, it seems like the author goes out of his way to illustrate how different the overall female mind is versus the male mind, and that how the combination of both brings with it a good end result.

Brian O’Hare induces some hair raising stimuli as the killer’s MO turns from routine to outright sadistic and Medieval. I wasn’t as thrilled with the killer’s true identity when it was revealed as I thought I’d be: it gets revealed close to the ending of the book. Boiling down to an inhumane choice that has to be made, the writing carries with it a dark and malefic spirit of revenge pitted against years of investigative experience, brewing intuitive talent, and the squelching of topsy-turvy and bright gold star worthy teamwork on the side of justice.

Living in Cape Town, South Africa. People often tell me that I should get out more, but I'd rather read my brains out. View more posts

2 thoughts on “Review: The Dark Web Murders by Brian O’Hare”