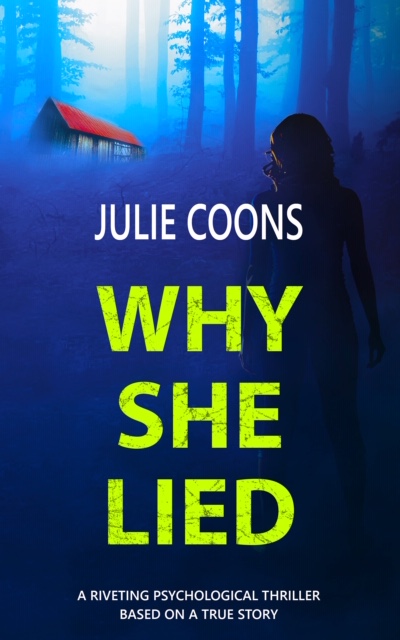 People who find it difficult to deal with bad things in life tend to mentally conjure up other or imaginary worlds to escape into. Living in something akin to a war zone can be tough for anybody. It can make you see things that you’re mind might find difficult to grasp as it can only take so much. This is where a wild imagination and daydreaming skill comes in for the main character in Why She Lied, a psychological thriller by Julie Coons which is based on a true story. This is the second book that I get to review by this amazing author. The first, a great read by itself, was a novel titled This Does Not Leave This House.

Julie lives in Oregon. Since her breakup with a man named TJ, someone who cheated on her for eight months during their relationship, she had a drop in self-confidence and self-esteem. An admitting clerk in the busiest trauma centre on the West Coast, Julie started dating a man named James, but if this man was right for her was a question that nagged at her from the very beginning. One night, he raped her and got her pregnant. After luring a little girl under the age of twelve out of a daycare center and sexually abusing her, he gets convicted. Can she move forward knowing that the man she fell for is a convicted child molester?

Julie is introduced as a single mother and an empath who has a daughter that nearly lost her life due to an illness called spinal meningitis. She is also portrayed as a hardworking woman that is glued to her job because of her daughter’s deadbeat father’s unwillingness to support her financially. Her portrayal is that of someone who can become quickly sad and depressed. Her history with guys isn’t great. Her rape experience with James is only the second. She was also raped in college. Her childhood experience wasn’t a favorable one: she learned rather to doubt than trust herself. But her strong motherly qualities allows her to tackle her life’s obstacles head on.

Coons writes in the first person narrative. The first scene vivifies a pretty hectic day in Julie’s life as it gives us a glimpse of what it’s like to work in a trauma centre. On this day a teenage boy looses his life due to a motorcycle accident; this boy’s brother is distraught to the point where he ends up running through her work station and jumping over her counter with one major leap. A short moment later a baby gets abused and flighted to a different hospital for a better chance to survive. She also describes the hospital environment in great detail. She explains, for example, what phone in the ER is meant for multiple trauma. This shift she works ends with her encountering a serial killer.

There are a lot of scary things that happened in Julie’s small town. Back in the 60’s, a serial killer named Jerome Brudos – he lived on a street not far from where Julie worked – was responsible for the deaths of several woman. He was known as “The Lust Killer”. Oregon sounds like a really creepy place to live in. One night, while driving home, she would spot a man in a hooded jacket that would show up on the evening news as being captured for questioning in relation to a recent murder.

While the author strives for an informative beginning, readers might feel that the details are a bit too much. The author focuses a lot on what life is like working in an ER department. The benefit of it is that getting this illustration out of the way is making it easier for readers to familiarize themselves with Julie Coons as an admitting clerk and showing readers all of the different things that she has to deal with for the day.

Ordered by the court to stay away from all children, James is a pretty misguiding character. I didn’t like the author’s initial lack of effort when it came to describing James physically. The author describes him only as not being a bad looking guy that is tall, dark and a little bit handsome. His friends view him as this really stand up guy whereas Julie knows what a monster he is. James has this friend that Julie ends up conversing with named Mike who is a father of four. Julie thus has a substantial reason for worrying about the safety of Mike’s children. James has this innate talent for getting people to both trust and speak highly of him.

Making matters worse is that James eventually makes it to Oregon’s top ten most wanted list by the FBI. I couldn’t help but notice that Julie’s empathetic personality makes it unable for her to see that James even made it to the list. The guy that Julie ends up crossing paths with is a detective named Joe, a man who turns out having an extremely gigantic heart inside him. Someone had been watching Julie and her daughter when she drove up to a secluded trailer in the woods one day. Quite a hair-raising moment during the story. Another is a sure threat that was made on her life through a phone call. “I’m wondering if this could be a lot bigger than just James being a wanted fugitive.”

The author writes that she used to think that the worst monsters were religious monsters and that priests and nuns are like wolves hiding behind habits. Though religious sexual predators are not unheard of, I thought this view of hers to be harshly worded and I saw it more as an attack on religion.

This is one of those stalker novels that gets your heart beating pretty darn fast every time you hear the phone ring. Julie Coons offers something indispensable, pummeling through this flyblown business that is child abuse and human trafficking. She inspires readers to stand up against these horrifying monsters that live among us.